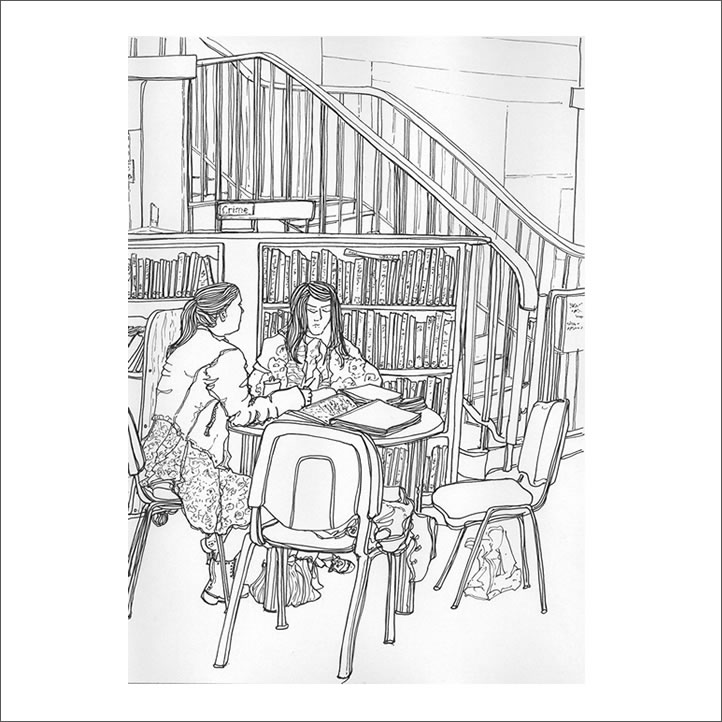 Jane Hughes is a Liverpool-based artist whose main practice lies in the field of on-site documentary drawing.

Influenced by the Mass Observation project, the nature of Hughes’ documentaries is direct observational drawing, often in busy locations.

She limits her materials purely to pen on paper, finding that an indelible line is an honest and clear way of putting the information down. Once a viewpoint is identified, it is simply a case of sitting and drawing.

Subject matter ranges from the recording of student life in Art & Design departments completed during residencies at both Liverpool John Moores and Liverpool Hope Universities, through to projects with a more political agenda such as drawings made in shops due for demolition and local libraries forced to close.

Hughes studied Fine Art at Liverpool John Moores University, graduating with a first class honours degree. She has exhibited nationally and internationally, including juried drawing shows in Australia, the Czech Republic, Italy, Slovakia, and the USA. Solo exhibitions have been held in Colchester, Derry/Londonderry and various venues in Liverpool including the Unity Theatre and at departments in both Liverpool and Hope Universities.