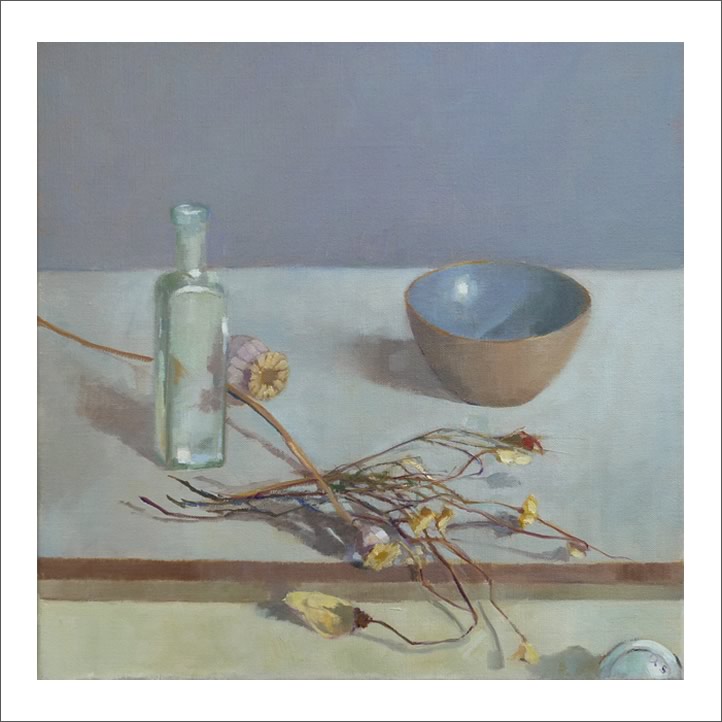 Although the subjects of my paintings are still lives and figures, they are really about the fall of light and stillness. I paint and draw still lives and people in my studio, where the paintings slowly evolve until I am satisfied that they have achieved harmony and balance. When I have to, I work from drawings or reference photos, but these are second best to reality.

Dried or dead flowers have been a predominant theme in my work during the last year, with other natural objects such as shells or bones juxtaposed with manufactured objects such as bowls, bottles and marbles. The quotidian objects take on new importance in the paintings because of the hours that I spend looking at them closely and trying to paint them. It is not the easiest way to produce a painting but for me it is the most satisfying.

I exhibited widely including two solo shows in London where I lived until 2001 when I moved to West Kirby and since then I have exhibited in many Merseyside exhibitions and had a solo show in Liverpool as well as a painting bought by the Williamson Art Gallery for their permanent collection. I also had my second Liverpool solo show at the Unity Theatre in February 2016.

I have always liked figure drawing and when I could not find any sessions locally I set up my own in Hoylake which have proved very popular with experienced artists and beginners alike. I also run leisure oil painting sessions at the same venue.