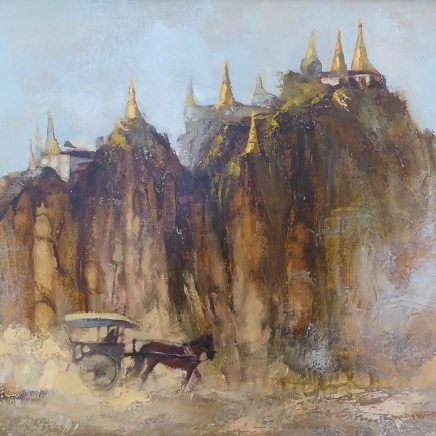 Prof Sun Myint has been an accomplished artist for the past 50 years. He attended the State School of Fine Arts in Yangon at the age of 12 and started exhibiting in 1964. He was one of the founder members of the modern art movement in Burma. He exhibited regularly with U Paw Thet, U Kin Maung Yin and U Win Pe and later with younger artist groups in the late sixties. The group exhibit regularly at the Institute of Medicine in the ‘Dome’ on Prome Road. Diplomats bought many of his paintings. Most of these are in private collections but some are in museums throughout the world. During one of his exhibitions, a female nude painting was rejected by Burma art and culture council who regularly inspected the exhibitions before public viewing. He was banned to exhibit for one year. When the ban was lifted in 1975, he submitted several nudes which were all accepted, unexpectedly. This was the first time female nudes were ever allowed to show in Myanmar. One of the original nude paintings from his 1975 exhibition was on display at this year RCP’s art exhibition in 2009. He is a founding member of Lokanatha Gallery at Pansodan in Yangon since 1971.

He came over to the UK in the late 70’s and is now working as a Consultant Clinical Oncologist specialising in Papillon contact radiotherapy for early rectal cancer at Clatterbridge Centre for Oncology. He introduced contact x-ray brachytherapy (Papillon) for early rectal cancer in 1993 after leading his team from Clatterbridge Cancer Centre to Lyon a year earlier. This year, NICE has approved Papillon for patients with rectal cancer not suitable for surgery. He was awarded Honorary Professor for his achievements in Medicine by the University of Liverpool in 2012. Contact:  sun.myint@nhs.net